Jacob Gertz pops the tiny push button into his mouth like a piece of gum. He’s ready for war and the 15 viewers tuned into his Twitch stream know it. In the corner of the screen, we see a webcam stream of his face. Gertz wears glasses and a white headset fit for a fighter pilot. Focus is nearly painted on his face as the tubular piece of plastic moves from the left to the right side of his mouth. The 2017 game Hollow Knight blinks to life in the center of the screen. Gerta75 is now live.

At 19-years-old, Gertz suffered a life-changing spinal cord injury that bound him to a wheelchair and limited most function in his hands. A gamer since childhood, he set out to find a new way to play Halo 3 and the other video games his friends obsessed over. YouTube led him to a video about a modified Xbox 360 controller that moved several of the rear-buttons to the front of the remote while mapping one trigger to a push button that a user can press with their tongue. It wasn’t a perfect solution, but it was one that would put him back in the game.

An electrical engineer by day, Gertz turned to live streaming on Twitch in 2018 to tell his story and share his love of gaming with a wider audience. In weekly gaming streams under the moniker Gerta75, he’s an open book, answering questions about living with a disability, growing as a content creator, and that little button sitting in the corner of his mouth. I had a chance to chat with Gertz about how he uses live streaming video, community building, and storytelling to bring new viewers into his world each week.

How long have you been playing video games and when did you first get into live streaming them?

I was born in 1986 and we had a Nintendo Entertainment System in the house since day one. When I was big enough to hold the controller and get an idea of what I was doing, [my older brother] was letting me play games with him. I first got introduced to live streaming through owning an Xbox. You could just stream right from your console. In July of 2018, I was like ‘maybe I’ll actually try this’ so that’s when I got a formal PC and actually went for it.

How do you manage your time between being a full time electrical engineer and Twitch streamer?

It’s exhausting. I really have to plan ahead and schedule my day. Every day I try to journal and set goals around what I want to get done. If I don’t have a clear path or something written out in front of me, it’s easy to get home and just want to watch Netflix and do nothing. I know if I make a list in the morning to edit videos or make backgrounds, I’ll actually get those things done when I get home. I respect a lot of people I know that work full time and stream, because it takes a lot out of you.

You mention in your Twitch bio that you use a modified Xbox controller to play video games - How did you develop this controller and how does it work?

It was a matter of Googling “disabled xbox controller” and “accessible gaming equipment” and all this stuff. I came across a kid whose uncle was electronically inclined and he modified an Xbox 360 controller for him. So, I just messaged him on YouTube and he sent me some links and gave me a bit of direction. We ended up finding the circuit board layouts of the controller and finding out where we could solder new buttons on. We just started from there and it took a bunch of iterations and breaking things. [I’m on] like the 7th or 8th iteration of this thing and it works pretty good.

How has digital storytelling helped you share your story?

I try to make [my situation] as prevalent as possible and I think I’m going to try to draw more attention to it. At first, I was shy or bashful about having my face on my stream and people being like ‘what’s he doing?’ but everybody that I explain it to thinks it’s awesome.

Twitch is my time to meet with people with the same interests as me and on top of that I get to shine a little light about disabilities. I know not everyone has a lot of exposure or experience with disabled people, I know I didn’t. Twitch has given me a different way into the gaming community that’s unique. It’s been a great experience.

How did you find Kapwing and what have you used it for?

I was scrolling through Instagram and came across this account called Better Gamers.  He was saying “There’s no excuse for you as a Twitch streamer to not be creating content from your streams and posting it on other social media platforms” and he mentioned Kapwing. That’s exactly what I was looking for. I just needed something to chop up clips, add overlays, add text, and then compress it to a size that is compatible with Twitter, Instagram, and Discord.

I think it’s a great service. There’s so many people I hang out with on Twitch that have no editing background at all. They just need something where they can download their highlights and edit them quick and maybe put an overlay of their Twitch username.

What tactics have you found most useful for growing your Twitch page and Discord community?

Every hour or so [in my live streams] I mention other platforms where I can talk more with the audience outside of my normal streaming days. I also really push my Discord, because that’s where I’m most active and I know that not only are they engaging with me there but also with the other people in my community. It seems that a lot of people share the same interests in my Discord. They might be into anime, which I’m not that familiar with, but I have people in my community who can continue that conversation and then they want to hangout in my Discord to talk with those people.

It’s a slow process and it’s about learning a lot of patience. If you try not to get frustrated and keep that energy up consistently, people will come. Before I even click “Go Live” I say: 'Where’s my head, where’s my energy, and where do I need to be before I broadcast to the world?'.

We were fighting this Hollow Knight boss and there’s this girl who hangs out in my community who is from Canada. I kept saying “We’re going to beat this guy for Canada,” as a meme or whatever. So, we finally won and I played the Canadian national anthem which I know most of, because I grew up in Michigan right across Lake Superior from Canada. I can’t sing at all. I was butchering the Canadian National Anthem.

That was the first clip of my stream that caught some traction, and it was just a moment. You don’t always get those. To this day, they still quote that in my community.

What advice do you have for gamers and creators who want to get into live streaming on Twitch?

Just do it. Don’t wait until you can afford a fancy webcam or capture card. Whatever means you have, just get into it and try it and get exposure and learn from it. I’ve been streaming for 16-months now and I’m still learning all the time. If you hesitate and put it off, it’s not going to get any easier. Create and take notes and do better the next day. 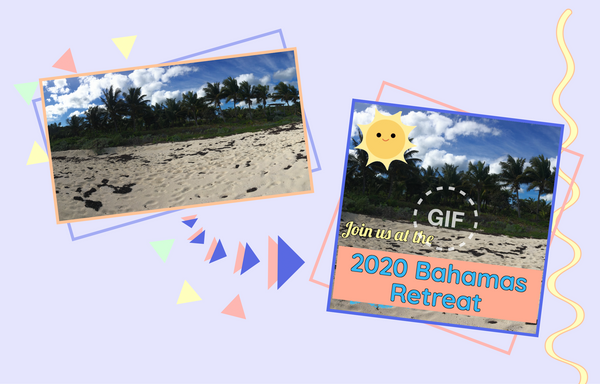 For many types of GIFs – posters, ads, invitations, ecards – it's best to animate a simple image or series of pictures by using moving text effects, GIF stickers, or geometric overlays. In this article, I'm going to show you a quick & easy way to create GIFs from your photos by using Kapwing. 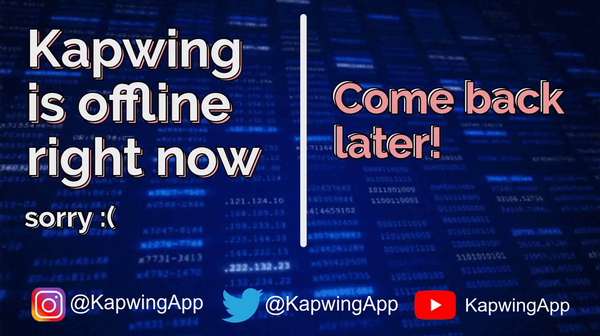 Since some high-level pros make their living on Twitch, it can be intimidating to begin streaming as a newcomer. You can spend money on flashy, custom visuals for your channel, but you don't need to pay – I'll show you how to make your own high-quality offline banner for free.