Byte is a brand new video app for iOS and Android with a simple premise - an endless feed of funny, weird, and sometimes touching six-second looping vertical videos. Created by Vine co-founder Dom Hofmann, Byte (often called Vine 2 by its early adopters) is a modern no-frills take on the discontinued Vine app. Users can record or upload six-second video clips with Byte’s built-in camera and post them to one of 16 categories ranging from “chill” to “fitness” and “experimental”.

With TikTok currently dominating the short-form video market on mobile, Byte has some major catching up to do if it wants to establish a significant community of creators in 2020. Currently, Byte offers no creation or editing features other than a simple frame matching tool. That means adding music, stickers, filters, or even text to your Byte videos requires additional video editing software. In this article I’ll show you how to make a Byte video and add additional elements using a free online video editor called Kapwing.

Recording inside the Byte app is a delightfully minimal experience, but I wouldn’t recommend it for videos featuring any sort of visual complexity. A quick scroll through the “Popular Now” section of the app reveals that many of Byte’s most prolific early creators aren’t using it either as their uploads are littered with effects not available in the app today.

Until Byte adds more creative features to its camera, you are best off recording everything on your device’s camera app and then uploading to Byte later. The platform is geared toward vertical video and you’ll want to record in this format for the best results. While videos cannot be any longer than six seconds on Byte, the app does require your upload to be at least two seconds long. Byte’s trim tool is easy to use and will come in handy if you have issues with video length when you’re ready to upload.

Step 2: Edit Your Video Outside of Byte

One of the best ways to stand out on Byte is to upload videos with visual elements that aren’t available in the app today. I recommend Kapwing because it's free, works on any computer or phone, and is well suited for vertical video, but you can use any video editing software you like. Outside editing is the only way to add music, overlay subtitles, or resize a Byte recording made on your phone. Original video recordings aren’t required to create great videos though. Remixes of YouTube videos, side-by-side videos, video memes, and more are all likely to fare well on the app.

Viral audio clips and video remixes were a quintessential part of Vine that haven’t found a place on Byte yet. The app’s developers have promised more creative features in the near future, but until then, free online video editors are essential to bringing this magic to Byte in its earliest days.

When you're done editing and all six seconds of your video look brilliant - it's time to post. Inside the Byte app, press the circular button at the bottom of the screen and then click the “+” to upload a video from your device. At this point you’ll be given the option to trim your video, select a category, and add a caption before posting publicly. The category system is supposed to help with discovery, but in my experience, choosing a proper genre for my Byte content hasn't led many new viewers to my uploads yet.

It’s too soon to know whether or not Byte can survive in an era of 500 million monthly active TikTok users. The app’s success is entirely dependent on the community that forms around it and how they choose to embrace a return to the short-form looping video format. Developer Byte Inc. has stuck to the formula that made Vine an instant hit while embracing emerging ideologies around social media like hiding follower counts and minimizing the impact of likes and rebytes. With new creative features and a partner program that promises to pay top creators on the horizon, Byte has a distinct opportunity to establish itself as more than a six-second flash in the pan.

We will continue to update this article as we learn more about Byte and watch it evolve in 2020. If you're using Byte, you can see everything we're creating by following us @kapwing. Thanks for reading, and let us know if you have ideas or suggestions for how we can make Kapwing a better online video editor for Byte creators.

Want to add some personality to a social media post? Use this collection of GIF overlays and image to video effects to add motion to a still image. Browse through examples and use our free tool! 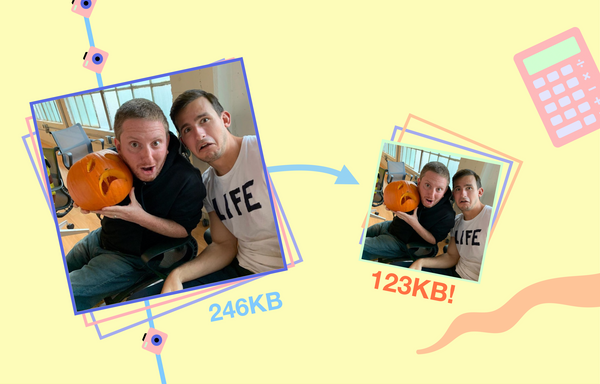 A lot of photo upload destinations have very strict file size & dimension limits – anyone who's tried to share multiple photos via email or change a profile avatar knows this issue all too well. In this article, I'll show you how to reduce the size of your JPEG files in under a minute.

Kapwing Resources
—
How To Edit Videos on Byte