Adding a caption above and below an image has become the most popular meme format in recent years. Instead of adding a text box to an image directly, meme makers add the caption above the image in a black or white rectangle. Memes with writing above are popular on Instagram, Reddit, Twitter, and Facebook.

Why did this trend start? Writing text above and below the meme image began with screenshots from Twitter, the memes that have rounded corners. After that, people realized that it’s nice to have the text above the image so that it doesn’t block or obscure what’s going on.

Also, because of the rise of Instagram and the square aspect ratio, meme makers have space above and below a landscape image to embed text. Instagram doesn’t show text in the explore feed, so if you’re a meme maker hoping to get discovered you need to add text to your image or video before posting.

In this article, I’ll show you how to make a meme with writing above the picture. This tutorial uses a free website called the Kapwing, the most popular online meme creator for videos. Kapwing’s Studio is a tool for adding text, making collages, and designing layouts for photos, videos, and GIFs.

Open Kapwing and find the meme generator. It’s free to use and works on any device.

Right under the header and purple button, you’ll see a collection of generic meme formats you can use to get started. The first option is a black square meme with white impact text; the second option is a white square meme with black Arial text. The fastest way to make a meme with writing above or below is to choose the template you want, drop in your image or video, and download the output.

If you scroll farther down the page, you will see a gallery of ready-made meme templates with videos and pictures already uploaded. Browse this funny meme collection for inspiration, laughs, and quick ideas, or click on one to customize the text and make your own.

To design a completely new meme or custom meme format, click the “Get started” button at the top. For the sake of this tutorial, I’m going to start with the white template. Click “Make It” to make your own.

Now it’s time to add your meme picture! After the blank meme template loads, click “Replace” or drag and drop your file onto the editor. Kapwing supports images, GIFs, and videos, so you can use any type of visual media you want. If you want something from YouTube, you can import from a URL.

After the media uploads, use the corner sliders to position and resize it on the meme canvas. The layer can be full-width or can have a border. If it’s a video, you can trim or mute the video layer.

Click on the text caption and type in your own words to edit it. Kapwing supports all international characters and emojis, so say whatever you want! Creators can also adjust the size, position, font, alignment, style, and color of the text.

In my example, I made the meme text Montserrat font and centered my video clip so that there is text above and below. You can also expand the canvas in any direction using the “Resize” button in the main toolbar.

Kapwing’s Studio has lots of other powerful features to explore before you finish your meme. You can use the “Timeline” button to make the text appear and disappear after a certain time or overlay stickers using “Images.” Animate the caption with a custom library of text animations, change the background color, insert watermarks, or add music on your meme. To make your meme longer, you can duplicate the scene on the left to loop the video or GIF on repeat.

Once the preview looks correct, click “Done” to process the meme. Kapwing will burn it together on remote servers then return the finished meme back to you. You can share the URL of the web page with your friends or “Download” to your camera roll.

Memes made on Kapwing can be re-edited, meaning you can share the template on Reddit or with your friend to reuse it over again.

Happy memeing! I hope this article helps you generate the modern meme format with text written above the image. You don’t have to settle for old-school meme formats where words are embedded directly on top of the image. Looking forward to seeing all of the lolz roll in! 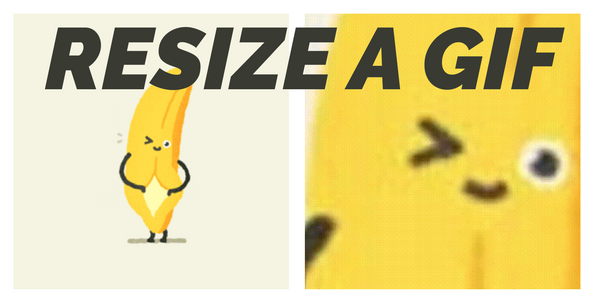 GIFS are so fun, they’re the most fun! GIFS are like the moving paintings in Harry Potter. But sometimes there’s a particular part of a GIF you want to highlight or

Text posts have emerged in popularity on Instagram as a way to share funny tweets/written jokes, forge an aesthetic around fonts and words, or reveal a complex thought. Even though a picture