It’s hard to tell if 2020 has felt like 10 days or 10 years, but either way it’s a bit shocking that the Spooky Season of Halloween 2020 is upon us already. Even stranger, you might not know what you’re going to do to celebrate, much less what costume you’ll wear. A global pandemic and public health concerns make every outdoors activity something to reconsider seriously, and trick-or-treating will be riskier than most outings.

So, whether you choose to dare the scare outside or keep the creep indoors, I’m going to help your costume brainstorm by giving you 5 hand-picked ideas using the greatest memes of 2020. Let’s get started!

NOTE: Remember to celebrate safely! If you're not comfortable going out with other people, be clear with your friend group about your concerns. And if you don't feel safe answering the door for everyone that may come by, you can always keep a bowl stocked with candy outside your door. If you do plan to participate in in-person trick-or-treating activities or workplace Halloween parties, be sure to have a mask on hand. Since many costumes come with a mask anyway, just include a multi-layer cloth one in your mask ensemble!

1. I Am Once Again Asking (for your candy)

The presidential campaign of Senator Bernie Sanders may not have made it to the finish line, but the "I am once again asking" meme will be remembered for several terms. Not only is it one of the very most popular meme formats of the year, but it’s perfectly appropriate for trick-or-treating – think of your candy contributions as little campaign donations.

What’s more, Bernie himself makes for a great Halloween costume, even without the meme. Some unruly white hair, a grandfatherly pair of specs, and a comfy brown coat, and you’ll be the spitting image of the Senator in no time. Throw on a strip of cardboard with the meme’s text, and you’ll be running your own grassroots candy campaign.

The timing is perfect for this one. Yes, the meme may be fading out at this point, but the Dreams Challenge at the peak of its recognizability – remember, all the people whose doors you’re knocking aren’t likely to be quite as online as you are.

The best part of this meme costume is its simplicity and affordability. Some off-brand Ocean Spray Cran-Grape drink? Couldn’t be easier to acquire. Light gray hoodie and black vans? It’s fairly likely that you know a few people who already have them in their closets. Skateboard? Everyone has a friend. All you need is Fleetwood Mac’s “Dreams” playing on your phone or a portable speaker, and you’re set.

As I suggested earlier, not everyone will be going to their school or office in person around Halloween, and very many are unlikely to take to the streets for in-person trick-or-treating. Instead, our celebrations may happen virtually, like almost everything else during this absurd year, over video conferencing platforms like Zoom.

The best thing about a Zoom Halloween party? Zoom’s Virtual Background feature allows you to create fully immersive costume scenes, perfect for dressing yourself up right inside one of 2020’s most viral memes. Here are the best 2 for you to try yourself:

If you want a high-effort Zoom meme, this may be the one for you. Better yet, do you want an incredibly low-effort meme costume? This is also the perfect choice. I’ll explain. You could, if you’re so inclined, dress up in a full white cat costume and jam in mirror-image on the right side of the screen. Cat costumes of varying *ahem* age-appropriateness are a staple for Halloween season, so you should have no problem finding the one you want.

At the same time, the meme itself is plenty. Just have the CatJam video playing as your Zoom virtual background, bob your head along with 2020’s feline phenomenon, and you’ll have plenty of meme material for very little effort.

Whichever way you want to go, get started by adding a spooky background to this CatJam transparent video template, then add the GIF or MP4 file you created to your Zoom backgrounds.

This meme format may only be recognizable to the Moderately To Extremely Online population, but it gives you enough creative freedom that it’s worth using on Halloween. It comes from this tweet:

Since then, the “Dear men, What is keeping you from looking like this?” meme has been taken to every extreme you can imagine – wholesome, absurd, offensive. For your costume, you’ll want to keep it safe, but you can go crazy with it. A T-rex suit? Classic. A bedraggled, just-rolled-out-of-bed look? Right on pitch. A typical zombie costume with the tweet as your background? A perfect meta-costume. You really can’t go wrong.

Just download this pre-formatted virtual background and either add it directly to your Zoom party or replace its background with something spooky in the Kapwing Studio.

Another music-centered Halloween costume? Really? Yes, and this one gives you far more artistic freedom than the Dreams Challenge, as great as that song is. This comes from earlier this year, when the docu-series The Last Dance featured its main subject Michael Jordan jamming out on a bus ride. He's feeling it so much that the meme took off almost instantly.

For the full Jammin' Jordan look, I recommend any black Bulls jersey (I can't find the exact practice 'fit from the meme, but this gold logo jersey is pretty close), some black basketball shorts (these Bulls ones really complete the costume), some simple yet funky 90's shades (the ones I linked are expensive, but they're the legit edition), old-school over-ear headphones, a plain black beanie (Bulls branding optional), and a plain ol' white t-shirt. For the full effect, walk around playing whatever song you imagine MJ is listening to in the classic meme video. Whew, I know that's a lot, but do your best.

I hope this article has given you some inspiration for hilarious horror, however you plan on celebrating Halloween this year! If you’re interested in further meme ideas, templates, and content ideas, subscribe to Kapwing App on YouTube or follow us on Twitter @KapwingApp. In the meantime, check out these related articles on memes and meme creation:

• Meme Fonts: Which Ones to Use and How
• How to Make the Jordan Jamming Meme
• How to Combine Emojis Online
• How Tess Gattuso Gets Paid to Make Memes

Hear more about our journey as a scrappy media startup. 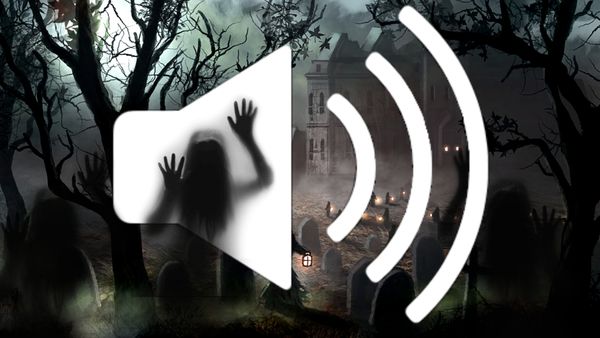 Sounds are the secret ingredient to making any video scary as they provide an immersive viewing experience and are crucial to leveling up the suspense. In this article, you'll learn where to find free scary sound effects and how to add them to a video online using an editor called Kapwing.

Recording a GIF on your phone can be just as simple as taking a picture or shooting a video. Here's how to record a GIF file on your phone, using only your browser.